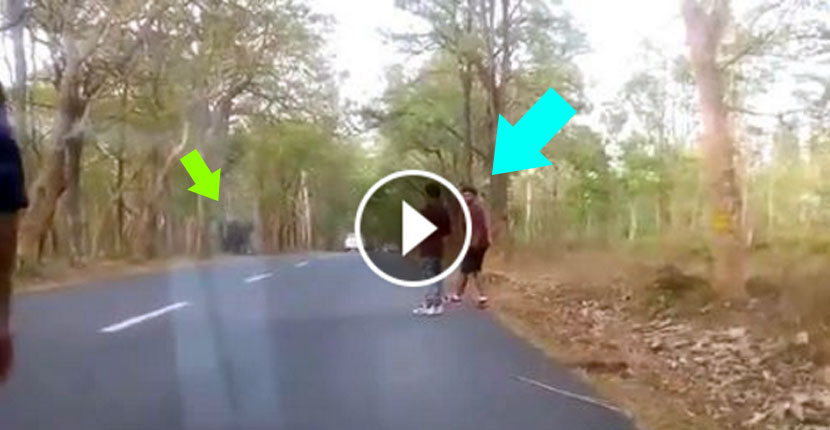 Video of young Muslim men stoning elephants was filmed in southern most state of Kerala INDIA on March 25th, have gone viral on social media. Its the same state which was recently in news headlines for barbaric killing’s of stray dogs. Shockingly its a very popular tourist destination, whose official headline to attract tourist is “God’s own country“.

What’s more shocking is that mother elephant and her baby was standing without disturbing any travelers beside to National Highway 212, inside Wayanad Wildlife Sanctuary. Some people even posted comments and raised the question’s like “Why people of Kerala hate animals so much”.

4 MEN ARRESTED AFTER VIDEO OF THEM STONING ELEPHANTS GOES VIRAL !Four young men have surrendered to officials in Kerala’s Wayanad region after a video of them pelting stones at elephants in the forest went viral on social media. The incident happened on March 25, and came to light through a video that was shot on a mobile phone by men in another car. A case had been registered after the video emerged.The youth can be seen running towards an elephant and her calf standing on the shoulder of the road, pelting stones at them and running away. The incident happened near the Muthanga checkpost on National Highway 212, which connects Kerala’s Kozhikode with Mysuru in Karnataka.The men who are shooting the video can be heard lamenting over the behavior of the youth, saying, “Now everyone will want to get out of their cars to see their elephants.”Seconds later, they add, “The elephants can kill them.”Travelers throwing stones on an elephant nearby Muthanga on Wayanad-Mysore NH . The mother elephant with her baby was standing without disturbing any travelers beside to NH inside Wayanad Wildlife Sanctuary. This incident has captured by another traveler. The forest dept already filed a case against these travelers and searching for them. Dated 25/03/2016.The men shooting the video can then be heard on the phone, complaining, presumably to an official, that the youth have gotten out of their car and are pelting stones at the elephants and calling out the number of the youths’ car.After the video went viral on social media, a number of angry users tracked down the details of the vehicle’s owner online and posted the details.The four young men – Riyas, Shamal Hashim, M Shameer, Abdul Razaq – belong to Meppadi, in Wayanad.The picturesque NH-212 runs through three different wildlife sanctuaries – Wayanad National Park, Muthanga Wildlife Sanctuary and Bandipur National Park – where motorists frequently witness animal crossings, especially during the months without rain.The contiguous forest area is home to elephants, tigers, leopards, bears and many kinds of deer, and sees some of the animals being killed by speeding vehicles from time to time. Frequent boards along the highway also request travelers not to stop their cars or get out of the vehicles. The close proximity with wildlife along this road also sees it being closed to traffic at night.Info Source: http://timesofindia.indiatimes.com/india/4-youth-surrender-in-Wayanad-for-throwing-stones-at-elephants-after-viral-video/articleshow/51597747.cms?